Virgin Gorda, or "Fat Virgin" refers to a protruding mountain, noted by Columbus, on the second largest of the British Virgin Islands. It is only 10 miles long and 2 miles wide (8.5 square miles) with a population of approximately 2,500 persons

Virgin Gorda is known for its yacht clubs, quiet coves, and safe anchorages for bareboats (boats rented without the crew). It is linked to the other islands by a small airport and regular ferry services. The northern half of the island is mountainous with a good-sized peak of some 1,500 feet (Gorda Peak National Park - the highest point on the island), while the southern half is flat and scattered with giant sized boulders.

The BVI's most famous natural attraction, The Baths - a series of spectacular pools and grottoes formed by a combination of giant sized boulders - is located in Virgin Gorda. There are some 20 beaches on Virgin Gorda, including the beautiful Devil's Bay (a national park given by the Rockefellers to the BVI government in the 60's), Spring Bay, Trunk Bay, Long Bay, Mahoe Bay and Savannah Bay.

Little Fort National Park, located south of the Yacht Harbour, is the site of a Spanish fort, the walls of which are still partially intact. This 36-acre area also functions as a wildlife sanctuary. There is also the abandoned Copper Mine (mined by Cornish miners between 1838 and 1867, and perhaps even earlier by the Spanish) on the southeast tip of the island where a boiler stack and other 19th century stone buildings can still be observed. 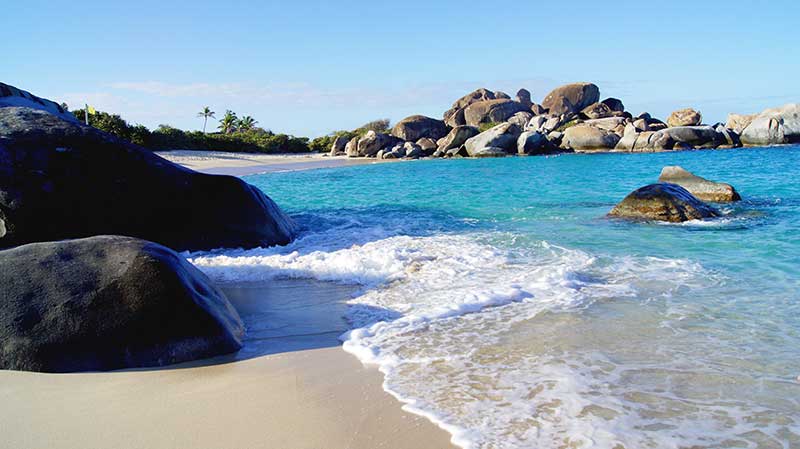 Devil’s Bay is one Virgin Gorda's picture perfect beaches. It's a beautiful white sand beach making it great spot for sunbathing and its azure crystal waters are ideal for snorkelling.

The prominent landmark dominates Mine Hill, on the cliffs of the south-eastern tip of Virgin Gorda. Surrounding the Copper Mine ruins there are many granite rock outcroppings, with additional deposits of quartz, feldspars, tin copper and other clay minerals. This abandoned copper mine played an important role in the history of Virgin Gorda. Spaniards passing through the BVI were the first Europeans to mine coppers here in the early 18th century. However, Cornish miners built the ruins that remain today in the 1800s, There are the remains of several structures including the chimney and signs with the background history of the mine. Bring your camera, the site offers several spectacular northerly views of the Virgin Gorda, Coppermine Bay and the Airport. All in all a very interesting and beautiful site and well worth the time to visit. If you plan to visit Virgin Gorda. 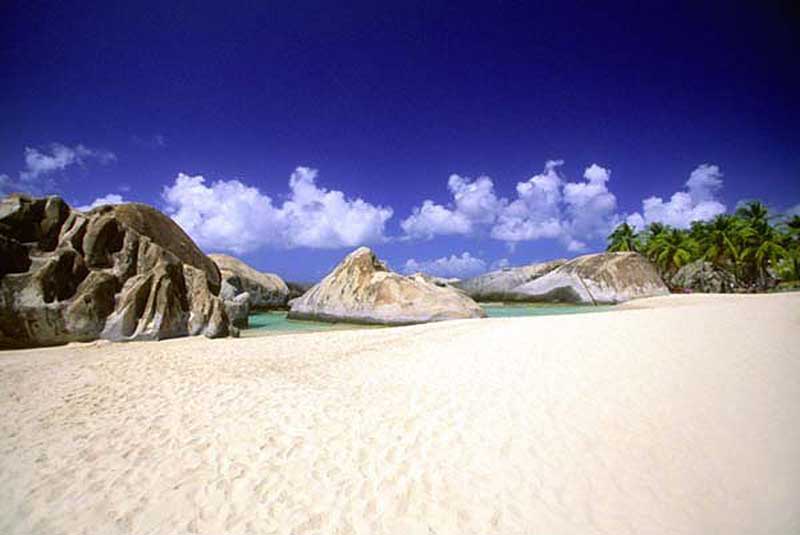 This beach with many crevices of swimming area between Virgin Gorda's beautiful signature boulders. Explore throughout the boulders and discover new swimming areas. One of the most romantic beaches in the BVI. Excellent for snorkeling and don't forget to take the climb on to the famous jumping rock and take the plunge.

There are few places on earth that are quite so stunningly beautiful and awe inspiring as The Baths on Virgin Gorda's south-west point. This coastline of boulders randomly scattered on to white sand stretches for about a mile.

Science suggest that these boulders originated millions of years ago when magma (molten rock ) pushed its way upwards, cooled and solidified resulting in large slabs of granite which later, because faulting and folding of the sea bed, was exposed. Today large parts of Virgin Gorda consist entirely of granite.

The highest point on Virgin Gorda at an astonishing 1370ft, Gorda Peak is located on the northwestern ridge, south of North Sound. This area was donated by Lawrance Rockefeller in 1974. The park is considered to be one of the last remaining examples of dry forest in the region. Vegetation in the park varies, from dry scrub to a moister mossy forest at higher elevations. Most exciting about the area Gorda Peak is home to the worlds smallest gecko.

Follow trails that lead to the lookout tower at the Peak, Hikers are rewarded with a panoramic view of the BVI, particularly the popular anchorage of North Sound and Anegada visible in the horizon. A perfect place for a romantic or family picnic is half way along the trail to the tower. Table and benches are provided and maintained by the National Parks Trust.